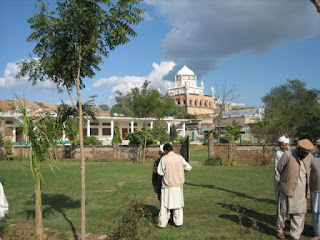 Jalalpur Sharif is a small town located in Jhelum, and is a Union Council of Pind Dadan Khan.
History
Jalalpur modern name came from the renaming of its ancient name, Girjakh, by its king Malik Darwesh Khan Janjua who was also a high ranking General of the Imperial Mughal Army under Emperor Jalaluddin Muhammad Akbar’s reign.
It is stated that Malik Darwesh ordered the renaming of Girjakh (part of his extended kingdom) to Jalalpur, when Emperor Akbar visited him. This was done in honour of the Emperor and the Janjua family's relationship. Jalalpur at this point was a flourishing centre of trade for the region. 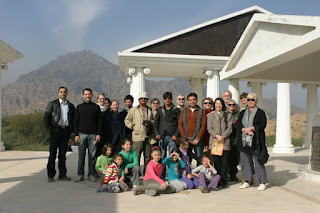 The history of the region dates back to 326 BC when Alexander the Great and his troops camped at Jalalpur Sharif, located on the right bank of Jhelum River, prior to the historic Battle of Jhelum against Raja Porus. During this battle, which was fought across the river, Alexander’s horse Bucephalus was killed but its remains were brought back and buried close to Jalalpur Sharif where subsequently Alexander built a city named after his horse. The ruins of an ancient city are spread across the hills towards the east of Jalalpur Sharif.
A notable landmark of the town is the Shrine of Pir Syed Ghulam Haidar Ali Shah, a prominent (Chishti) leader of the Punjab, Pakistan, (d. 1908). It is this association with the shrine of one of the most well known Chishti spiritual leaders of the sub continent that the title of Sharif is pronounced together with Jalalpur. Pir Syed Ghulam Haidar Ali Shah and his descendants, notably including his grandson, who was given the title Amir-e-Hizbullah, Pir Syed Muhammad Fazal Shah were extremely influential in the spiritual development of the Muslims of Punjab, and also in the political movement that eventually led to the creation of the Islamic Republic of Pakistan.
Administration
Jalalpur Sharif has one police station.
Education
There are three higher secondary and high schools they are:
Govt. Higher Secondary School
Govt. High School for Girls
Govt. High School for Boys
Posted by Ahmed Science Academy at 01:23